When Amanda’s parents divorced, her dad, Kevin Haney, moved to Los Angeles to practice his craft as a makeup artist.  Amanda and her sister would visit him and get to see the projects he was working on.  Amanda loves to tell the story of how she once met Jonathan Frakes, the actor who played Commander William Riker on Star Trek: The Next Generation TV series.  Here she is telling the story in her own words at Great Camp Sagamore‘s Mountain Music and Dance weekend in October of 2017:

In that moment, all she could muster up was, “You’re pretty!!”

I only have vague recollection of a late evening in my den in the November following Amanda’s telling of her story.  But I wrote a handwritten letter to Jonathan Frakes.  I told him who I am, who Amanda is, who her father is; and I told him of the day Amanda met him on the set of TNG.  I suggested that, if he’s the autograph signing type, that it would be neat for Amanda to have an 8×10 glossy photo of him as Commander Riker.  I boldly suggested that he might include, “Amanda–You are pretty too!”  I Googled for his agent’s address, picked one that seemed most likely (several addresses came up), addressed the envelope and put it in the mail.

Nothing came of it and I eventually forgot all about it.  Fast forward to Thanksgiving weekend, 2018.  We had just returned from spending the weekend in Rochester with Amanda’s mom and step-dad.  We did the usual schlepping of our bags, grabbing the mail, and tending to the cats.  I hung up my coat and grabbed the mail from the box and sat at the dining room table to inspect it while Amanda paid attention to the cats and started putting her things away.  There was one large envelope and there were two things very odd about it: 1) It was from some place in California I had never heard of, and 2) it was addressed to me in my own handwriting.  I mumbled and grumbled loudly about this as I sliced open the end of the envelope.  I peeked inside and pulled out the contents about 2 inches before I realized what it was.  I gasped.  Audibly.  Loudly.  “What is it??” Amanda called from the other room.  As I quickly shoved it back into its envelope, I stuttered, “I…can’t…TELL YOU!!”

“I’m just going to assume it has something to do with Christmas,” she said.  Yes.  Absolutely!  Perfect.  That’s exactly what it was!  Inside was an 8×10 glossy photograph of Jonathan Frakes as Commander William Riker with writing in marker: “Amanda–You are Pretty Too” with his signature.  The envelope was addressed in my handwriting because whomever did so simply cut the address out of the letter I had written.

I bought a frame and wrapped it up.  On Christmas morning we opened all of our gifts to each other, with Amanda’s mom and step-dad there.  When we were “done,” I told Kyle that it looked like there was one more left, a la “A Christmas Story” when Ralphie gets his BB gun.  I took video to capture the moment:

So there you go.  The story of the Prettiest Christmas present ever!  The photo sits in a place of honor in our living room. 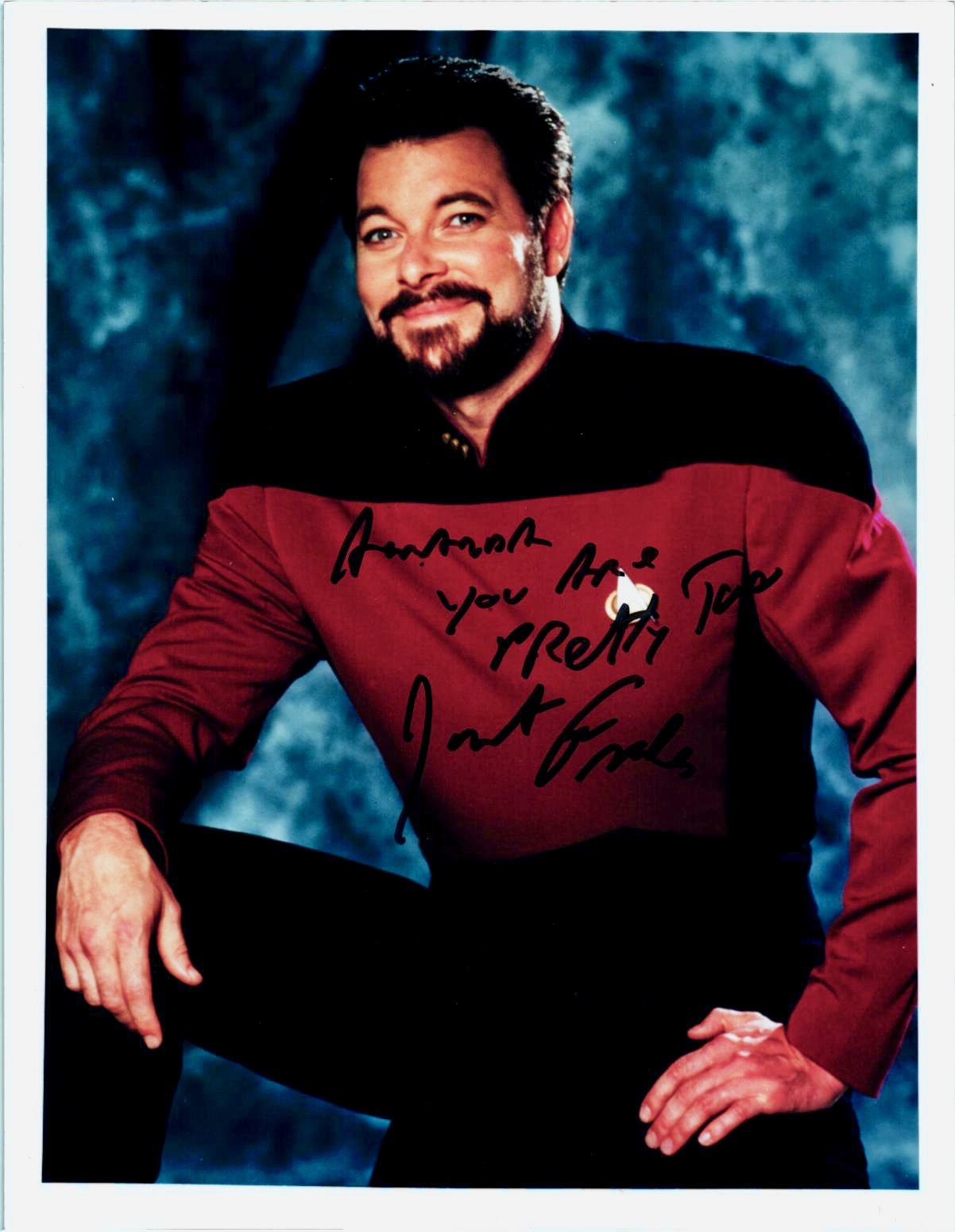