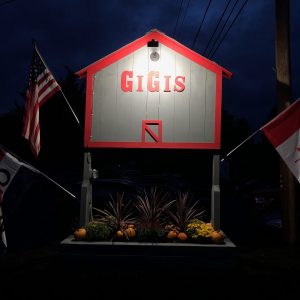 GiGi’s On The River is a new restaurant in a location in my home town of Keeseville, NY that has been several restaurants over the years.  With new owners and quite a facelift, inside and out, it re-opened last week.  My parents and I went there for dinner this evening to see what it was like.

We made reservations for 6:00 because it’s new, it’s Saturday, everyone’s talking about it, and we didn’t want a long wait for a table.  We arrived at 5:55 and were promptly seated in the dining room area (there is a separate wing that has a bar and other seating).  The place was nearly full and there were people leaving because of the anticipated wait for a table.  I’m sure no restaurant likes to see this, but I guess it’s a nice problem to have!

It was almost 20 minutes before we received the attention of our waitress.  Not that she was doing nothing, mind you.  She was very busy.  Since we had had plenty of time to decide what we wanted, she took our complete order–drinks, appetizer, and entrees.  Much to my pleasant surprise, the drinks came in about 2 minutes.  The appetizer took half an hour, however.  We had ordered stuffed mushrooms, which were very delicious.  (Though it was odd that our bread plates were teacup saucers.)

By 7:00 I had finished my beer and wondered how long it would take before that was noticed.  (My parents were sharing a bottle of wine and would not have this problem.)  I had only 5 minutes to wait, because that’s when our dinner was served.  All three plates came at the same time (something I no longer take for granted when eating out).  I ordered the Steak Delmonico, medium-rare.  It was closer to medium, but still a very nice steak.  My mother enjoyed her salmon, and my father’s scallops were amazing.  He was served *9* scallops, each about the size of a half dollar!  The waitress asked if we needed anything else, and I held up my empty glass.  “Sam Adams, right?” she asked.  She had remembered my drink!  (Something else I no longer take for granted.)  I was impressed.

We didn’t get any water, though I’m sure we could have had some had we asked for it.  On reflection, I think this is actually a good thing.  Why give water by default to people who might not even want it, only to pour it down the drain later and then have to USE more water to wash the glass?

The Server’s station is in a poor location just outside the kitchen exit.  Moreover, the placement of one of the dining room tables means that servers exiting the kitchen frequently must walk through the dining room just to get to the bar area instead of taking a direct route.  It wasn’t exactly distracting…I just notice things like this and wonder if they’ll change it.

There was NO MUSIC!  Yay!  Not anything coming from any speakers, and thankfully nothing live.  And the acoustics of the dining room were fabulous.  We could actually hear each other without having to shout.  We could hear that there were other people there, but not what they were saying.  This is what a dining atmosphere should be!

I had a direct view of the Server’s station and noted that they were tallying up checks manually with notepads and calculators.  I understand that they’re just getting started, but hope that they’ll invest in a menu/point-of-sale system that will automate that task for them.  It will likely save them money by minimizing human error.

All in all, we enjoyed the atmosphere and the food very much.  I am eager to return and try more of the menu.  It is great to see this place alive again!  The recent closure of the North Country Club left a void in the Keeseville Dining Scene (if such a thing exists).  I just hope that the people who are coming to see what all the fuss is about continue to come.  I think this place deserves it.