Today I had my next scheduled appointment, this time with a Nurse Practitioner.  (It turns out my surgeon is in Poland helping Ukrainian refugees!)  The cast was removed, the incision inspected, and the staples removed.  Everything was textbook and the incision looks “very good”.

The surgeon’s plan for me was another cast for 4 more weeks, but the P.A. was candid with me:  she was concerned about muscle atrophy and tightening of the reattached tendon.  I was given the option of a brace which would restrict the movement of the knee as the cast had done, but which could be set to allow increasing amounts of movement (as directed and advised).  I was skeptical at first, but once I saw the brace and how it is designed I was all for it.

So I now have a brace and am free of the cast!  The brace is set to mimic the cast (no bending allowed), but has just enough play in it that a minimum amount of bending will happen naturally.  I have another appointment a week from now at which things will be checked again and I will likely get permission to adjust the “unlocked” setting to something that will allow me to start stretching the tendon while sitting.

I feel I need to tell you that I’m in no pain!  Once the initial pain from the trauma/surgery wore off I was and still am in no pain.  Nor am I “laid up.”  I am getting around as well as one can without bending one’s leg.  The only things with which I need assistance are scooting into the back seat of a car and putting on my left sock.  Other than that, Life is pretty much normal (though I am avoiding flights of stairs for obvious reasons–no need to tempt Fate!).

It’s been a week since my surgery.  I’ve been getting used to life in a full-leg cast.  I had a follow up appointment with Dr. Katz on Monday.   He said I’m clear to do anything the cast allows as long as it does not cause pain; so no restriction on exercise, walking, etc.  I am using muscles I don’t normally use to move in ways I don’t normally use; and my leg is getting used to the ever-presence of the cast (rubbing, chafing, etc.).  My “standing stamina” is improving, though I can’t seem to get comfortable while standing.  Today I realized that my LL Bean slippers, while very nice for lounging, are not practical daily wear.  After over 2 hours straight of standing for meetings/calls (I work from home right now) my left heel was hurting a lot.  I managed to figure out how to slip on my sneakers and wow, that felt a lot better!  Yesterday I made a single lap on our very short street (3 houses each side).  Today I’ll do 2.

Next Wednesday, at the 2 week mark, I go to have a chunk of the cast removed for wound/incision inspection and staple and/or stitch removal.  I’ll probably just end up with a whole new cast, which I’ll have for another 4 weeks.  I’m still unsure of the mechanics of what the doctor actually did while he was in there.  I’ve seen a few different procedures on YouTube, but am not sure which one was done to me.  I will find out if I can. 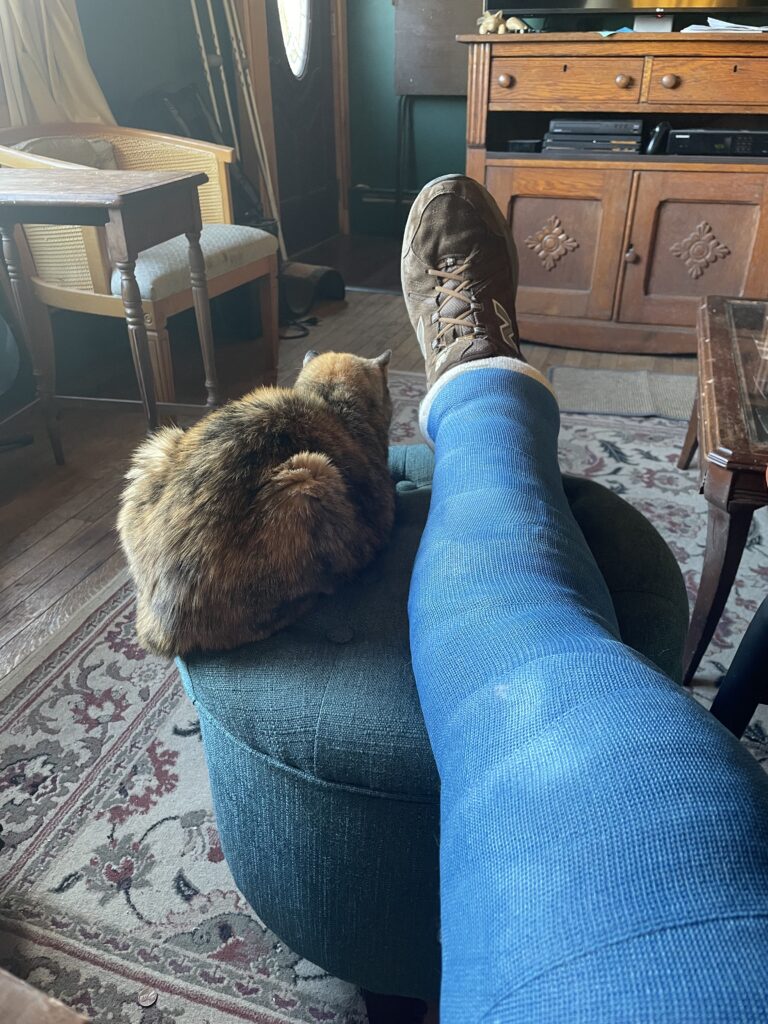 On Monday evening, March 14, 2022 I was coming down the stairs from my home den when I somehow missed the last step and came crashing to the ground floor landing on my knees.  It hurt but I immediately knew something wasn’t completely right with my left leg.  It was bent and it hurt when I tried to straighten it out.  I reached down and felt the kneecap and it wasn’t where it was supposed to be.  Worse, I could move it in ways it’s not supposed to move.  Realizing I had very likely seriously hurt myself I lay still and advised Amanda to call for an ambulance.

I was loaded onto a stretcher and taken to the hospital.  In the ER I was x-rayed and received a CAT scan.  There were no broken bones, but the doctor diagnosed a quadricep tendon tear.  I was given a brace to keep my leg straight and told to visit Dr. Katz, a local orthopedist as soon as possible.  I called the next morning and was able to be seen at 10:00!  Dr. Katz removed some fluid with a needle and then numbed the joint with lidocaine.  With pain no longer in the way he instructed me to try to lift my leg (I was lying flat on my back) straight up off the table.  I couldn’t–not because it hurt, but because my body  simply would not respond.  This confirmed the diagnosis.  I was scheduled for surgery the next morning which I am told was a success.  I am now in a full leg cast which keeps the knee joint completely immobile.

Some comments on all of this: First, I don’t know how or why I missed that last step.  At my age I usually focus clearly when I’m walking on uneven terrain.  All I can think is that I got distracted and thought I had gone the full 14 steps instead of just 13.  And down I went.

The brace did its job, but not well enough.  I was not looking forward to weeks of recovery time if it meant having to be as careful as I had to be with that brace.  I could not move from sitting to standing without assistance.  There was no way for me to move my leg without trying to use the muscle which was no longer attached, and that caused severe discomfort.  I learned quickly how to relax that muscle, but it required having someone lift and manipulate my leg following my instructions.  6 weeks of that would have sucked.

The cast is amazing.  It’s super thick and my knee is completely immobile.  There is no way I can do damage to the repair that has been done and I can move my leg around by myself.  I can sit down on and stand up from regular chairs by myself.  I can get into and out of bed by myself.  Once I get used to it and have built up enough muscle strength in the muscles I need to use to adapt to the cast, I may not even need crutches to get around.

I close by enumerating my blessings.  The American healthcare system is generally a mess, but I am keenly aware of whatever privilege it is that allowed me to see a doctor and have surgery less than 48 hours after my injury.  The outpouring of concern and support on social media is nothing short of fantastic and has been a real mood booster for me.  I am also blessed to have family that I can count on to take care of me and do the things I simply cannot do for awhile, especially and most wonderfully my wife Amanda.

The timing for something like this is never great, but if all goes well I’ll be out of this cast and on the mend by the end of April.  I can’t really complain about that!  There are a few places I won’t visit and events I probably won’t be able to attend in person, but 6 weeks will fly be before I know it.  This could have been a lot worse!